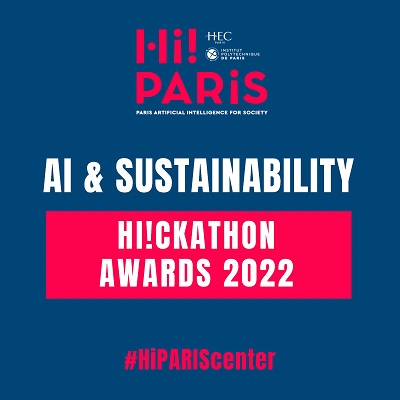 Pierre-Antoine, Sarah, Charles, Antoine, Laurine, Riad, Emilien and Louis have brilliantly distinguished themselves at the Hi!ckathon 2022. This challenge in AI and Data Science was organized by the Hi! PARIS Center, a joint venture between HEC Paris and the Institut Polytechnique de Paris, of which Telecom SudParis is a member. The event was supported by: L'Oréal, Capgemini, TotalEnergies, Kering and Rexel, who rewarded 5 winning teams with theme-related prizes.

For its second edition, the Hi!ckathon set a new participation record, gathering 236 students from more than 10 different schools and universities in seven countries. In total, 17 interdisciplinary teams reached the finish line, after five weeks of skill-building and training, plus an intense two-day experience on March 5 and 6 on our Palaiseau campus.

During 48 hours, coaching sessions and intensive courses took place during the weekend to help students reach the final sprint. Led by 12 scientists and 3 company coaches from partner companies, these sessions were intended to stimulate student innovation in creating holistic Artificial Intelligence solutions.

The Challenge: Artificial Intelligence and Sustainability

Specifically, the topic that brought all of this year's participants together was about sizing the carbon footprint of a company's employee car fleet. The students sought to harness computer vision to bring a creative and relevant scientific approach to the fight against global climate change by reducing one of its main drivers: CO2 emissions from automobile transportation, known to be the main means of commuting, according to a study by INSEE.

The teams that crossed the finish line had successfully submitted 3 required deliverables: a data science model, a scientific procedure document, and a commercial video pitch.

These submissions were evaluated carefully by a jury of academics, business representatives, and data science experts who paid particular attention to the business and societal impact of each project.

Five prizes were awarded to the winning projects at the closing ceremony: Business Pitch Award by L'Oréal, Scientific Approach Award by Capgemini, Technical Excellence Award by TotalEnergies, Interdisciplinarity Award by Kering and Innovation Award by Rexel.

Telecom SudParis engineering students have distinguished themselves brilliantly in 3 of the 5 categories:

The Technical Excellence Award is given to the tam whose data science model is the most technically advanced and which has obtained the best score, calculated on the basis of a synthetic measure of the model's accuracy and environmental performance.

The Kering Interdisciplinarity Prize is awarded to the team that best exploited several disciplines to produce a scientific approach and a convincing presentation of the business opportunity.

The Rexel Innovation Prize rewards the team that has produced an original, unexpected and relevant solution to the challenge presented during the hackathon.