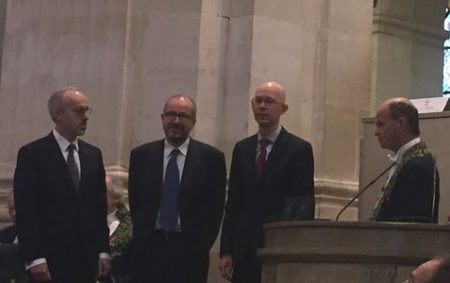 At the start of 2017, IMT and the French Académie des Sciences created the Grand Prix Award and the Young Scientist Prize (with support from the Fondation Mines-Télécom) to reward exceptional European scientific contributions in the fields of digital technology, energy and the environment. These Prizes were awarded on Tuesday, November 21st at the official awards ceremony held in the Cupola of the Institut de France. We had the opportunity to interview the winners at the event.

On March 29th we announced the creation of an IMT-Académie des Sciences Prize in the following fields:

Last June the jury assessed and made a selection from among the 20 applications that were submitted, all of them very high-level. 13 submissions were in the running for the Grand Prix and 7 for the Young Scientist Award. The three 2017 winners best reflect the intentions that inspired the creation of these awards.

– Sébastien Bigo, 47, director of the IP and Optical Networks research group at Nokia Bell Labs, belongs to the great French school of optics applied to telecommunications. Through his numerous innovations, he has been and continues to be a global pioneer in high-speed fiber optic transmission…

Read the interview with Sébastien Bigo on I’MTech

– Pierre Rouchon, 57, is a professor at Mines ParisTech and the director of the Mathematics and Systems research unit at the same school. He is a recognized specialist in Control Theory. He has made major scientific contributions to the three themes of this discipline: signage systems in connection with trajectory planning, quantum systems and invariant asymptomatic observers…

– Julien Bras, 39, has been a lecturer and research supervisor at Grenoble INP – Pagora since 2006, as well as being the deputy director of the LGP2 Paper Process Engineering Laboratory, after having begun his professional career as an engineer in a company in the paper industry in Italy and Finland. For over 15 years Julien Bras has been focusing his research on developing new, highly innovative engineering procedures, with the aim of creating a new generation of high-performance cellulosic biomaterials and developing the use of these agro-resources…

Read the interview with Julien Bras on I’MTech